I’ve been reworking a lot of equipment for the next Mysterious Space release. I’ve noticed that when a player finds equipment with entropic effects, they almost immediately consider it garbage not even worth thinking about. equipment that is spawned with an entropic effect IS given two extra “levels” worth of bonuses, but this rarely made up for it; or even if you DID find some shield with higher regen rate than your current shield, but a “+10% chance to take an extra 1 damage when hit”, that entropic effect just FEELS lame. “thanks, but I’ll stick with something that doesn’t try to dick me over.”

SO: I decided to remove ALL entropic effects from Mysterious Space. it was kind of painful to do: a lot of code went into supporting them, and most entropic effects were unique things I spent time not only coding, but coming up with; things I hoped might interact with other systems. for example, one entropic effect sometimes scrambled your sensors, but a couple OTHER effects gave you bonuses while your sensors were scrambled. it was my hope that some of these entropic interactions might be taken advantage of by players. in retrospect, the chances of getting JUST the right combination of effects was much too low; in the vast majority of cases “sometimes scrambles your sensors” is just an annoying effect that’s not worth equipping.

a couple equipment and item effects needed to be adjusted now that entropic effects aren’t around (notably, the Advanced Technology that applies entropy to a random equipment), but I ALSO took this opportunity to tweak some stasis (blessed) effects! 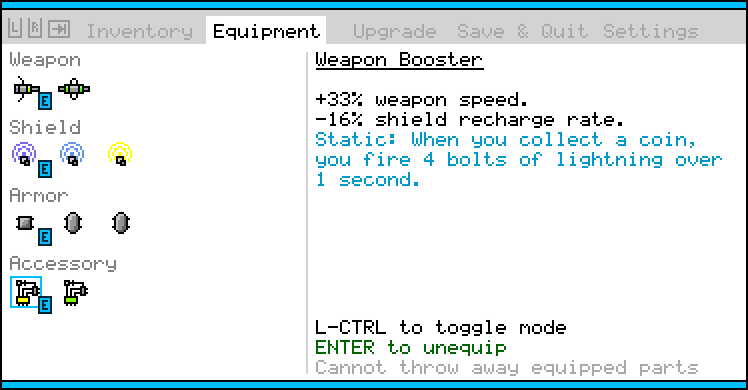 my main goal in tweaking stasis effects was to make the effect something that can “stack”. it’s always been possible for a piece of equipment to get multiple levels of stasis (or, previously, entropy), but some stasis effects didn’t do anything when you had multiple levels of them. for example “clears all negative effects from your ship” and “fires bullets in all four directions while your sensors are scrambled” aren’t effects that can be made MORE powerful if the item gets a second level of stasis (well, in the “fires bullets…” example, maybe more bullets could be fired, but that seemed less-exciting, since we already have several other effects that fire rings of bullets).

in the end, some effects were entirely rebuilt from scratch, others were tweaked, and a couple – at the time of this writing – STILL don’t stack; I’ll finish them up at a later time.